Andromeda is a galaxy and the setting of Mass Effect: Andromeda. The game focuses on the Heleus Cluster section of the galaxy. 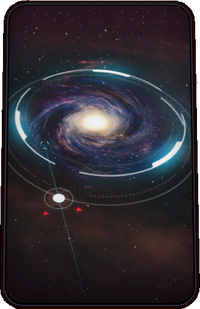 Located 2.5 million light years from the Milky Way, the Andromeda galaxy is the largest galaxy in the Local Group. Also categorized as M31, Andromeda is a spiral galaxy roughly 220,000 light years in diameter, containing approximately 1 trillion stars (compared to the Milky Way's 300 billion). The Heleus cluster is a large star cluster located on the galaxy's outer fringe.

Andromeda has roughly 14 satellite galaxies, which orbit the galactic disk. Evidence shows a disturbance where one of these companion galaxies, M32, passed through Andromeda's spiral arms several million years ago. Andromeda itself is also accelerating towards the Milky Way at roughly 100km/s. In roughly 4 billion years, the Andromeda and Milky Way galaxies will collide and merge, forming a new galactic disk.