The Asari Adept Multiplayer Recruit Pack is an add-on multiplayer DLC content pack that can be purchased from licensed vendors (Microsoft Store, PlayStation Store, Origin). This add-on can be discounted with a subscription to EA Access.

Purchasing this DLC content pack will add an MP DLC Pack - Collection Items pack available to claim in the multiplayer store under the Rewards tab. 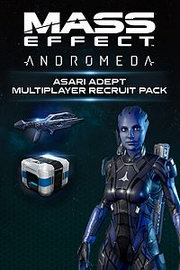 Join the fight to save humanity well equipped with the Multiplayer Recruit Pack – Asari Adept Edition. This pack offers everything you need to hit the ground well-armed and ready for battle.
- The pack features the Asari Adept character, a great starter class known to be fierce, graceful warriors. Lightly armored, with a focus on biotics as the primary form of attack and defense, Asari specialize in crowd control and damage.

The MP DLC packs are unique in that they will award variant mods if the mods listed in the pack are already at Rank X. Normally these variant mods can only be purchased with Mission Funds in the Item Store. The substituted mod will not necessarily be for the same type of weapon.

If the weapons listed in the pack are already at Rank X, specialized variant versions will be randomly awarded.

If the equipment item listed in the pack is already owned, a piece of unowned equipment will be awarded.