Aya is a planet in the Onaon star system.

The following missions take place or are acquired on Aya: 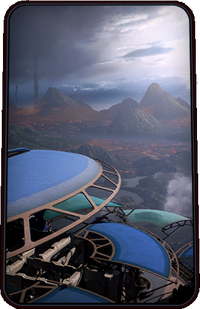 Aya is an anomaly in the Heleus Cluster; a lush planet where a Remnant site appears to be active. It is a sanctuary for the angara, the only known sentient species local to Heleus, and guarded fiercely against outsiders. This is helped by Aya's position relative to Heleus' black hole, whose gravitational lensing effect makes Aya harder to detect. The Scourge also makes the approach to Aya extremely dangerous for untrained pilots. Scans indicate numerous kett wrecks lost in the Scourge nearby, picked clean by angaran salvagers.

Aya is also the headquarters of the Angaran Resistance movement against the kett, whose leaders advise Aya's planetary governor, Paaran Shie. Director Tann has ordered that Aya is not only to be considered sovereign territory, but a military power. While the Tempest and its crew were allowed to visit peacefully, the Nexus is advising extreme caution to other potential visitors, and ordering the distribution of "early contact" guidelines.

With relations warming between the Initiative and the angara, diplomatic overtures continue. The Initiative is opening an embassy on Aya with Paaran Shie's approval, while extending invitations to angaran diplomats and scientists to tour the Nexus. Our Cultural Exchange is beginning several cooperative programs intended to foster better understanding between the various Milky Way species and the angara.

The following achievements and trophies can be earned which are related to Aya: