The character customization menu allows the ability to tailor the weapons and equipment for any of one of thirty-six different character kits. Only the currently chosen character kit can be customized. To change the character being customized, use the Character Selection menu.

Under the character customization menu there are four sub-menus: Loadout, Consumables, Skills, and Appearance.

The Loadout menu functions in a manner similar to loadout in singleplayer gameplay. Weapons, weapon mods, and equipment can be selected as long as they appear in the loadout list. Any items marked as locked

in the Collection screen will not be available for use.

Unlike singleplayer gameplay, where additional weapon slots can be unlocked through skills, only two weapons can be equipped per character kit. Equipment is limited to a single piece.

Only four of the five Common weapons are available at the start of multiplayer gameplay before any packs have been purchased and/or claimed from the store. Weapon mods and equipment have to be unlocked through the store.

With the exception of the Pathfinder weapons, the same firearms that are used in the singleplayer portion of the game are available in the multiplayer portion as well. In addition, there are four multiplayer-only weapons. Melee weapons are not customizable; each character has a fixed melee weapon with unspecified stats.

Be aware that the stats for the multiplayer versions of weapons have been changed (some multiple times) with patches and updates. Consult the individual weapon pages and the Patches and Updates article for more details.

The description for each S version is nearly identical to that of the base version, with the addition of the following:
Nexus scientists have worked to improve APEX weaponry, creating enhanced Special Edition weapons that are showcased in a titanium finish.

The stats for the "S" variants are the same as or higher than those for the Common base version.

The S variant of a weapon will not appear in packs until after the base version of a weapon reaches Rank 10.

All S variant weapons are separate weapons compared to the Common base versions. It is possible to equip both versions of a weapon at the same time in the Loadout screen. 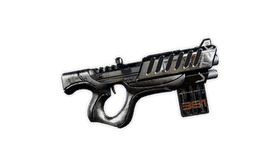 The following table lists the Tier I stats of each S variant weapon for ease of comparison.

With Patch 1.09, new variants of the Uncommon, Rare, and Ultra Rare weapons were added that have additional benefits.

These new versions have:

The specialized variant of a weapon will not appear in packs until after the base version of a weapon reaches Rank 10.

All specialized variant weapons are separate weapons compared to the normal version. It is possible to equip multiple versions of a weapon at the same time in the Loadout screen.

All S variant weapons are classed as Rare and the bulwark, concussive, and siphon versions of these weapons are based on the "S" variant stats. For example, the Charger Bulwark has the same stats as the Charger S Rank X, not the Charger Rank X. 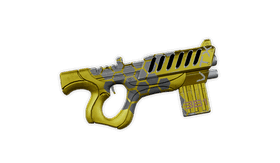 Bulwark paint schemes change to yellow with grey hexagons. The following additional text is added to each Bulwark weapon description:

(Bulwark): This weapon upgrade is based on tech accidentally discovered while creating shield generators. The Bulwark's user takes less damage from all sources when standing near allies - the more allies, the stronger the effect.

Gain Damage Resistance with each nearby ally. 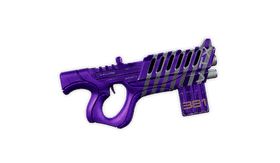 Concussive paint schemes change to purple with grey stripes. The following additional text is added to each Concussive weapon description:

(Concussive): Initiative scientists have outdone themselves with this weapon upgrade. Using this upgrade to kill an enemy with a headshot causes a massive explosion, essentially turning the target into a bomb.

Killing an enemy by shooting its weak point causes an explosion.

The following weapons are unavailable in the Concussive variant because the weapon mechanics won't allow headshots: 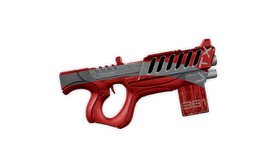 Siphon paint schemes change to red with a large grey stripe. The following additional text is added to each Siphon weapon description:

(Siphon): This weapon upgrade was developed by angaran scientists excited to experiment with biotics for the first time. The Siphon heals the user while shooting enemies and temporarily increases the amount of healing with fatal shots.

This weapon restores your health as it deals damage.

Be aware that the stats for the multiplayer versions of mods have been changed (some multiple times) with patches and updates. Consult the Patches and Updates article for more details.

The only way to acquire the enhanced weapon mods (which have increased benefits/penalties) is to purchase the appropriate weapon mod rarity level using Mission Funds in the item store. Only basic weapon mods will show up randomly in packs.

Equipment are permanent items that can be used during multiplayer gameplay.

No boosters are available at the start of multiplayer gameplay. Boosters can be found in packs that have been purchased and/or claimed from the store. Certain boosters can also be purchased from the item store.

Supplies are single use consumable items used during multiplayer gameplay. There are five supplies available but only four can be used during combat.

Starting players have the capacity to take two of each combat supply available to use in each multiplayer match. This is shown on the Booster Screen as (2/2).

Character Respec cards can't be used during combat and can only reset skills between matches. There is no known limit on the amount that can be collected.

Skill sets are fixed, character-specific, and consist of 3 active and 2 passive skills using a mix of the standard 36 skills available from singleplayer gameplay, squadmate skills, and new multiplayer-only skills.

Most multiplayer versions of standard skills have small changes in the numbers. A few skills have slightly different rank orders or have ranks that function in a different fashion. Refer to each multiplayer skill page for the exact details.

The multiplayer skill types break down into three main color coded categories: Combat (Red), Biotics (Violet), and Tech (Orange). Each category type has its own set of active (

As in singleplayer, skill points are used to purchase skill ranks.

With Patch 1.09, additional Ranks (XI-XX) for Character Cards were added to the store. An additional passive skill VETERAN BONUS was also added to all multiplayer character kits.

Gain Veteran Bonus tiers by collecting Character Cards above Rank X. Gain one tier for each Character Rank above X.

This passive skill remains LOCKED until a Rank XI Character Card is received from the store. Veteran Rank cards of characters will only drop after all characters of that rarity have been unlocked to Rank X. (Update 1.10)

Once a Rank XI Character Card is received in the store, the passive skill becomes available for the specific character kit and the bonus text will be listed.


Each Rank above X has its own Tier bonus.

Once a Character Respec card has been obtained, a new choice called "Respec Power Points" will be added to the bottom of the Skills sub-menu. Selecting this choice allows skill points to be refunded and spent again. This does not reset the rank (I-XX) of a character. This does not reset the level of the character. Resetting a character level can only be done once the character reaches Level 20 in the Character Selection menu with the Reset Level choice.

Next to the choice "Respec Power Points" is a number in parenthesis (). This is the current number of Character Respec cards the player has.

The Appearance Menu allows the changing of colors and patterns to the currently selected character. Character ranks III, V, VII, IX, & X unlock the ability to change more colors, patterns, and lights. Gain higher ranks of characters by purchasing packs in the Store.

Five of the following items can be changed for each character using an RGB dial. Pattern selection and skin tone use a slider.

The Appearance Menu also allows the name of the specific character kit to be changed. This name is only visible to the player and will not be shown to other individuals in the lobby or during multiplayer gameplay. There is a limit of 19 characters for the name.

The option to reset the character kit to default name and default appearance can be selected from the Appearance Menu.

The following achievements and trophies can be earned related to Character Customization: