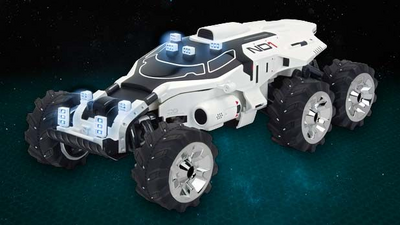 This officially licensed vehicle is an accurate 1:18 remote controllable vehicle featuring 6 wheel drive with front and rear steering and is app enabled (available on both iOS and Android devices). The app allows users to switch the vehicle's lights on and off and snap photos or record videos while on-the-go with the integrated camera. The vehicle features a built-in rechargeable battery with included USB charge cable.

This officially licensed model features a sturdy diecast metal body and a fully detailed interior with doors that open and close to reveal an illuminated control panel. It is an accurate 1:18 scale reproduction of the ND1 Nomad and includes a pop-up drone.