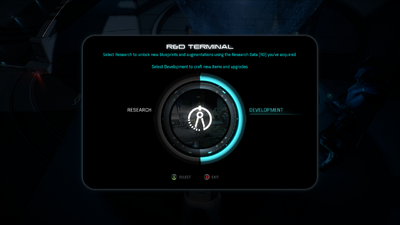 Development is second half of the crafting system with research being the first half.

When a new blueprint is unlocked it will appear on the Development screen. It can then be crafted, provided the necessary resources are available.

It should be noted that a number of blueprints are immediately available for development but certain blueprints are locked until certain requirements are met.

Nomad upgrades and special items are listed alphabetically, with no subdivisions.

Some items are named differently in the Research and Development screens compared to the Inventory screen. For example, the M-5 Phalanx is shown as Phalanx in Development.

Ready To Develop - No Blueprints Available

All blueprints the player currently has the necessary resources to build are shown on this tab. Blueprints will not be shown in this screen if the resources are unavailable. It is possible for this screen to be completely empty while the other four tabs have all of the blueprints unlocked so far.

Due to the vast amount of blueprints, and no way to sort them, this tab is of limited use. The other four tabs allow sorting by subcatgories and will indicate if required resources are missing.

This tab contains all of the offensive melee weapons and firearms.

Assault rifles are best for mid-range combat, with a balance of fire rate, accuracy, and stopping power. They generally carry a greater ammo capacity than other weapon classes.

A mixture of "hand cannons" and submachine guns (SMGs), pistols are generally the lightest weapons on the battlefield. The light weight allows more frequent use of powers.

Single-shot pistols tend to be more effective against armor than SMGs, but require careful aim.

Deisgned for long-range engagements, sniper rifles are generally the hardest hitting and most precise weapons available. The sniper rifle's power comes at the cost of ammo capacity and reload rate.

Ideal for combat at close range, most shotguns fire a deadly blast in a wide cone, but are ineffective over longer distances.

Melee weapons are wielded in close-quarters combat. Typically, they are most effective against unarmored and unshielded foes.

This tab contains all of the defensive pieces of equipment such as helmets and body armor.

Helmets help protect the wearer from hazardous environments and the dangers of combat.

You can visually hide your helmet—but retain it's gameplay benefits—in the Gameplay Settings menu.

Body armor helps protect the wearer from hazardous environments and the dangers of combat.

Leg armor helps protect the wearer from hazardous environments and the dangers of combat.

Arm and hand armor help protect the wearer from hazardous environments and the dangers of combat.

This tab is locked until certain requirements are met.

Once available, this tab contains permanent upgrades for the ND1 Nomad.

Only blueprints that haven't been developed yet will be listed here. Once an item is developed, it disappears from this tab and you can no longer find these blueprints on any menu. It is possible to see changes to the Nomad on the Nomad Stats tab on the Statistics menu.

Nomad blueprints are also unlocked at specific levels and will not appear on this menu until the appropriate level has been reached.

This tab contains blueprints for unique special items required for certain missions. Items will not appear on this menu until they are needed for the mission in question. Most items disappear permanently like Nomad blueprints once they are developed.

Most blueprints at Tier II or higher have augmentation slots for special devices that can be incorporated into a gun or armor piece during the development process. These augmentations boost stats or profoundly change an item's behavior.

The number of augmentations slots allowed per item can be increased by one with the Innovation cryo pod perk.

Once the desired augmentations are set, press the appropriate button to "Start Development". A menu prompt will appear showing the item and the default name. There is an option at this time before the item is created to rename the item. You must choose to rename the weapon at this point before creation is completed or the default name is locked in. Nomad upgrades and special items cannot be renamed. The menu prompt changes to "Confirm Development" to reflect these items.

Once any name choices are made and you are sure this is the item you want with all desired augmentations, press the appropriate button to develop the item. A new menu will appear onscreen with a visual display of the new item icon and name of your created item. You must have enough space in your inventory to develop an item. If you are at your Inventory item limit and attempt to develop an item, a onscreen prompt will inform you that "Development Failed". Make space for the new item by either selling or deconstructing an item to get below the Inventory item limit.

Almost all crafted items use an item specific light blue colored icon, no matter the rarity.

Crafted special items use a special set of black icons instead of light blue icons.

It should be noted that the only time you will be able to see the icons of the augmentations you are adding will be during the development process. Once an item has been successfully developed, only the effects and changes to the item can be found in the description of the item. There is no visual display of which / how many augmentations slots were / were not filled for an item.

Certain items have discrepancies and/or changes to the resources from the normal pattern used during development. These are confirmed through development to actually use the resources listed and are not display errors. These differences are listed below:

The mission Temporary Crafting Quest can be acquired and completed at the same time by developing a Zalkin I assault rifle at any research center. This mission never appears anywhere other than the Completed Missions section of the Journal with a