Element Zero is a mineral resource. 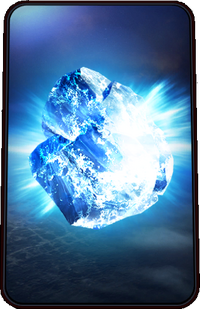 Also known as "eezo," the rare material known as element zero generates a field when subjected to an electrical current, which raises or lowers the mass of all objects within it. This "mass effect" forms the basis of modern technology, from weapons and manufacturing, to enabling faster-than-light travel.

Element zero is generated when solid matter, such as a planet, is affected by the energy of a star going supernova. The material is common in the asteroid debris that orbits neutron stars and pulsars, though mining such regions is extremely hazardous and requires significant investment.

Surveys of the Heleus Cluster suggested the region is rich in element zero, which was a deciding factor in the Andromeda Initiative's decision to settle there. Without eezo, the Initiative's technology would quickly become obsolete.

Element Zero can be detected via orbital scan, mined with the Nomad, and discovered in small amounts on foot. It can also be purchased from certain merchants.

Planets where element zero is listed as an available mineral:

Element Zero can be used in developing the following items:

The total amount of element zero required to develop a single copy of each item/tier that uses this resource is 5595 units.

The Heleus Defender Helmet I, II, III, IV, and V when deconstructed return the incorrect resource type and quantity of Element Zero instead of Remnant Core.