Eos, also known as Habitat 1, is a planet in the Pytheas star system. A signal is detected on this planet, similar to the devices on Habitat 7.

The following missions take place or are acquired on Eos:

The following audio and text logs can be found throughout Eos:

This anomaly appears after Making An Impression.

This Remnant Architect's programming directives have been interrupted. It is in an orbital standby mode and remains tethered to its home planet Eos. The Architect's systems are completing recovery from severe radiation exposure. The Architect itself appears to be conducting monitoring and analysis of Eos' atmosphere. 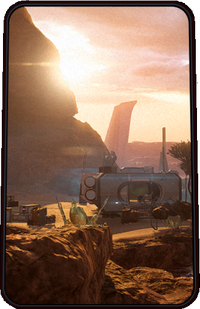 Eos, designated Habitat 1, was the earliest "golden world" identified for outpost placement. Named for the Greek goddess of dawn by Jien Garson personally, Eos embodied the hope of the Andromeda Initiative for a new start.

On arrival, the Nexus discovered that a world projected to be arid but comfortably habitable was now ravaged by radioactive fallout from the Scourge. The planet's atmosphere is wracked by storms that have spread the radiation across continents; periodic 130km/hr winds strip equipment and damage shuttles.

Reports from the Nexus include a sanitized account of two attempts to colonized the planet, both of which ended in failure and an unacceptable loss of life. There is also a significant kett presence on Eos, apparently investigating mysterious signals on the surface. Eos is now off-limits to unauthorized Nexus personnel, as the Nexus leadership believe it is no longer viable.

Activating the vault discovered below Eos' surface has had a dramatic and immediate effect. Radioactive particles are being stripped from the atmosphere by unknown means, and the resulting temperature changes are calming Eos' high winds. The planet's moisture levels are already showing improvement.

Prodromos, the first Pathfinder-established outpost has been founded in Fairwinds Basin, with Mayor August Bradley in charge. The Nexus is broadcasting footage of departing colonists and the new conditions on Eos across all communication channels.

Eos is heavily contaminated by lethal levels of radiation prior to activation of the planet's vault. All areas outside of specially shielded zones will cause