H-047c, also known as Habitat 5, is a planet in the Remav star system.

The following missions take place or are acquired on H-047c: 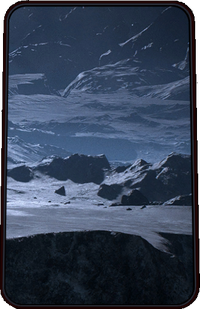 This small planet was of particular interest to the turian contingent of the Andromeda initiative. Long-distance studies suggested H-047c was a "golden world," eminently suitable for dextro-protein species like turians, earning it the designation Habitat 5. The turian ark Natanus set course for H-047c to ensure they would have a viable settlement site on arrival.

In the intervening centuries, astronomical studies show H-047c was pulverized by debris from the erupting Scourge. The dark energy of the phenomenon increased the mass of this debris to the point that the impact shattered the planet, leaving it uninhabitable.

With its magnetic field drastically weakened and much of its atmosphere lost, what remains intact of H-047c's surface is vulnerable to cosmic radiation. This has rendered the soil unable to support life, though it is a potential source of valuable helium-3.

H-047c has no atmosphere which allows excessive solar and cosmic radiation to cover the remains of the planet. All areas outside of specially shielded zones will cause

Due to the excessive levels of radiation, Pathfinder Ryder is unable to venture out onto the planet surface unless confined to the ND1 Nomad.