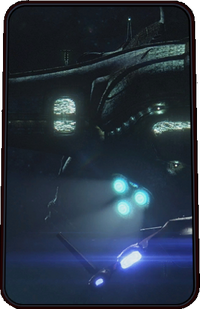 The kett utilize a variety of military aircraft, from agile dropships to enormous dreadnoughts. Closer inspection of kett starships, including several destroyed by the Scourge, has shown that they appear to be heavily biomimetic; while not organic, the kett take strong design inspiration from living organisms. Air filtration, electrical systems, and heat management mimic behavior seen in living creatures.

The few kett engine cores available for study show that while the kett use element zero cores, their design is radically different. While in comparatively short-range environments such as the Heleus Cluster they function similarly to Milky Way drives, kett drive cores are capable of gravitationally contracting space in front of the ship and shortening it behind, creating an Alcubierre waveform that allows the ship to traverse longer distances quickly. This design feature compensates somewhat for the lack of long-range mass relay transport in Andromeda, though these drives are highly inefficient by comparison.

However, it is clear we have only seen a small cross-section of kett starships; likely military vessels on long deployment. More scientifically advanced starships may exist elsewhere.