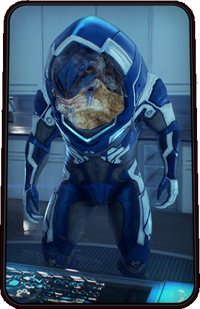 The krogan are a Milky Way species. 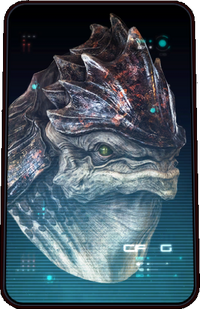 The krogan home world, Tuchanka, is one of the harshest in the Milky Way, honing the krogan into a physically powerful, aggressive, and adaptable species. Once considered heroes after the Rachni Wars, krogan expansion made them a threat to the galaxy until the turians and salarians used the controversial genophage to quell their numbers.

Several authorities questioned including the krogan in the Andromeda Initiative, given their history. Invitations were extended to several clans, particularly those who did not take part in the Krogan Rebellions, and their assistance eventually proved invaluable in building the Nexus. Colonist interviews show that many krogan see the Initiative as a chance to reinvent their people.

The krogan are considered a dying species in the Milky Way, as the genophage means only one in a thousand krogan pregnancies succeeds. In recent years, krogan have shown signs of adapting to the genophage, as they have to many other threats.

Krogan are exceptionally hardy, having evolved in a crucible of lethal conditions and monstrous predators. 240-degree vision, normally a feature of prey animals, gives krogan a broad awareness of their environment and approaching enemies. Their tough hides can withstand stabbings and gunfire, and multiple redundant organs allow them to survive internal injuries. An electro-conductive secondary circulatory system, rather than a central nervous system, makes krogan almost impossible to paralyze, while the "hump" on their backs stores valuable water and fats.

The extremely high birth rate of krogan, a response to Tuchanka's harsh environment, once saw them overrun gentler worlds within a few decades. The genophage has reduced live births to a relative handful.

Krogan physiology is also highly resistant to radioactive or toxic environments. This allows them to live comfortably on planets hostile to other life. Initiative scientists have studied krogan cellular regeneration while developing first-in colonist radiation treatments. 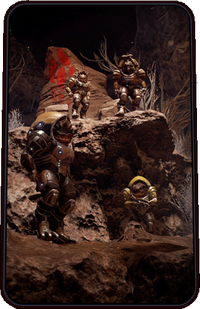 Krogan culture was irrevocably changed by the genophage. A society built on clan pride, conquest, and enduring any challenge could not survive the prospect of a quiet extinction. In the Milky Way, the krogan are a scattered and fatalistic people. Believing the genophage will never be cured, many subscribe to the idea of "kill, pillage, and be selfish, for tomorrow we die."

Krogan who don't become wandering mercenaries often live within clans with histories that stretch back thousands of years. Others organize under the banner of a single warlord, or into a "krantt" of like-minded warriors. The history and traditions of a krogan clan are maintained by respected shamans who prove their worth through grueling and secretive initiations.

Female krogan capable of producing offspring are valuable commodities. Most females live in separate camps, where they raise children until they are old enough to face Tuchanka's dangers. 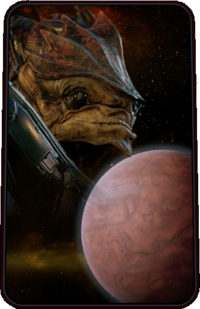 "A degree in krogan history" was apparently once a joke in academic circles, but excavations on Tuchanka show that ancient krogan had a thriving and impressive civilization. Unfortunately, their technological advances ran afoul of krogan aggressive instincts. Once the krogan entered the atomic age, they didn't hesitate to deploy nuclear weapons on Tuchanka, devastating the surface and reducing their people to scattered waring bands.

The salarians technologically and culturally uplifted the krogan, in return for their service against the rachni who were terrorizing Citadel space. Capable of surviving the harsh environments the rachni preferred, krogan units drove the rachni to extinction, and were hailed as heroes. They were granted gentler worlds to colonize, but their rapid breeding meant the krogan soon overran them and threatened neighboring species.

The resulting Krogan Rebellions lasted almost a century, until the turians deployed the genophage bioweapon. Unable to breed reinforcements, the krogan people fell into decline.