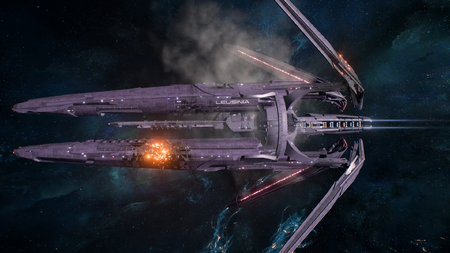 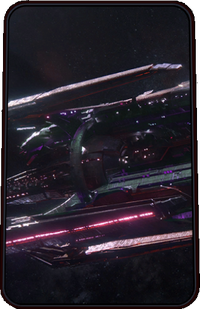 Constructed in orbit around Piares in the asari home system Parnitha, Ark Leusinia is named after a kingdom of wealth and learning in asari mythology. She is built to the same specifications as her sister ark Hyperion, with internal modifications to accommodate asari social preferences, and captained by Elonis Atandra.

The Andromeda Initiative was initially rejected as a human-driven boondoggle by many asari investors, and the construction of the Leusinia was met with ridicule. However, the efforts drew the attention of several Matriarchs who had assisted in previous attempts to send crewed missions to Andromeda, and their impassioned extranet addresses helped turn the tide of public opinion. At her departure ceremony, Ark Leusinia was officially blessed by the Atamna Politeia, an organization of siarist high priestesses from across the Asari Republics.

Ark Leusinia traveled to the Initiative rendezvous point in 2184, and left the Milky Way as part of the initial departure wave in 2185.

After reaching Andromeda and encountering the kett, Ark Leusinia came under attack by a group of specialized kett hunters known as the Decimation. Stolen kett navigational data allowed the ark to flee through the Scourge while evacuating as many civilians as possible, but constant harrying eventually forced the ark to go into hiding until rescue arrived.

After being escorted to safety, Ark Leusinia is now docked at the Nexus to offload he remaining colonists from stasis and undergo extensive repairs.

Leusinia is related to the following missions: