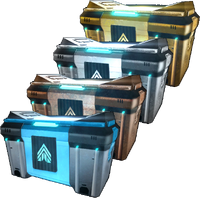 Loot boxes are Pathfinder rewards for completing strike team missions. They can be claimed through the Strike Team Console on the Tempest or in the Militia Office on the Nexus.

Loot boxes are listed by type and difficulty of mission, except for Research Data loot boxes, which are stacked as a single item. As with resource inventory, the quantity in the stack is shown in parentheses.

It is important to understand that strike teams belong to an overall account, not a specific Ryder.

Credit loot boxes are rewards for successful completion of standard strike team missions. Each box contains credits found during the mission. The amount is variable, with the average increasing slightly as Ryder levels up.

Item loot boxes are rewards for successful completion of APEX strike team missions. Each box contains an item recovered during the mission. The rarity of the item depends on the difficulty of the mission; the tier depends on Ryder's level.

Material loot boxes are rewards for successful completion of standard strike team missions. Each box contains resources discovered during the mission. The contents depend on the difficulty of the mission.

regardless of mission difficulty.

Loot boxes are represented by color-coded icons like other items found during gameplay.

The Ears to the Ground cryo pod perk gives a chance for a weapon or armor reward when opening a Material Loot Box. The item tier depends on Ryder's level when opening the box and matches the availability of found items. Materials will also be received, but the type and amount won't be displayed in the Rewards collection window.

There are no platinum-level loot boxes; gold-level boxes are awarded for successful platinum APEX missions.