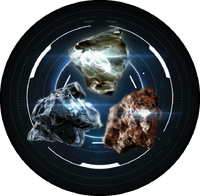 Minerals are a type of resource. They are the most common materials used in research and development. They can be discovered in space, purchased from merchants, or even picked up on foot in small amounts, but the best way to acquire minerals is with the Nomad's mining system. When exploring a planet, establish forward stations to detect major mineral deposits. Forward stations can be upgraded to detect additional mining zones with the cryo pod perks Expanded Field Analysis and Expanded Field Analysis II. 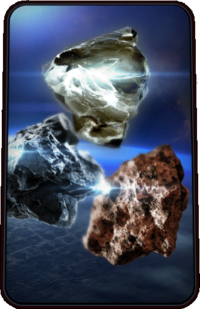 Crafting new weapons, armor, and equipment requires a variety of materials. Though there are strange new isotopes and ores in Andromeda, our scientists have identified familiar elements.

Heavy metals such as iron, cadmium, and nickel are used in construction and heavy manufacturing. Their density makes them useful for armor components and ammunition blocks.

Many light metals—including silicon, beryllium, magnesium, and aluminum—are resistant to corrosion and invaluable for computer components, heat sinks, and high-conductive electrical wiring, while lithium has both engineering and medical applications.

Titanium, a transition metal, is eagerly sought-after for starship construction. Vanadium improves steel quality and is used by the aerospace industry.

Noble metals—including platinum, copper, and iridium—are rare and valuable in the Milky Way. They are often used in high-quality electronics or machine parts that require high precision.

Minerals like graphite, used to manufacture carbon nanotubes and carbon fiber, and fluorite for high-precision scientific lenses, are more common but equally useful.

The Initiative pays well for more hazardous materials. Uranium is used in weaponry and nuclear-powered facilities, while element zero has applications in multiple fields: heavy industry, starship engines, jump-jet components, or even as an ingredient in many advanced medicines, to name but a few.

In the tables below, the total required amount for each mineral listed is the amount of that resource to develop one copy of every Tier for all of the items listed. This gives a general guideline of how much a mineral is used and how much you may need. If you develop additional copies then of course the requirement will be higher than the listed amount. Refer to each individual resource page for details on the specific items that can be developed.

Minerals can be purchased from the following merchants:

However, the mineral nodes found during Task: Hitting Rocks For Science do not give RD when scanned.