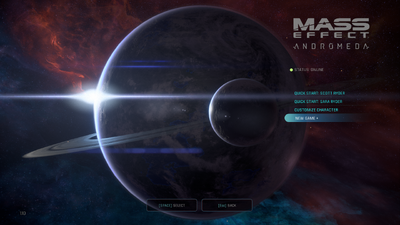 New Game + allows a player to get a head start on the next playthrough by creating a Ryder based on a previously saved game with the main story line completed.

The New Game + process has multiple consequences causing certain items to change and others to stay the same.

Everything on the Codex resets back to zero or the default state.

All currency such as Credits and Mission Funds remain after a New Game +.

Inventory mostly stays the same after a New Game + while some items reset.

After starting a New Game +, the item limit returns to 100. Most items in inventory will still be available (except as noted below) and the amount can be over 100 items. Ryder will be unable to do any inventory related actions until item count is below 100.

All weapons, weapon mods, and weapon configurations will remain. Any crafted weapons will remain the same as prior to the New Game +.

All armor, fusion mods, and armor configurations will remain. Any crafted armor will remain the same prior to the New Game +.

All consumables items in inventory will remain.

All acquired blueprints transfer over during a New Game + with the exception of a few special item mission related blueprints.

Most ND1 Nomad blueprints that were acquired and/or developed correctly transfer to the New Game + but two of blueprints Improved Boost and Improved Shield Regeneration can incorrectly show up again in inventory. Do not develop any Nomad blueprints until Ryder has landed on Eos and entered the ND1 Nomad for the first time. Entering the Nomad will install all of the previously acquired upgrades and remove any duplicated blueprints.

Certain special items remain in inventory after a New Game + while others reset.

Everything on the Journal resets back to zero or the default state.

Character level, squadmate levels, and XP earned from their predecessor carry over to the new game.

Certain map elements remain after a New Game + while others reset.

All missions and any mission progress reset back to zero or the default state.

Acquired upgrades and paint jobs for the ND1 Nomad carry over into a New Game +.

Research and development carries over into a New Game +.

Any romances will reset back to the default state and you can begin new romances with no adverse consequences.

Character skills, squadmate skills, and skill points already spent or unspent carry over from the previous game to the new game.

Because character and squadmate skills can't be reset until the Tempest is available, any changes to skill point allocation and skills loadout should be made to the original character before beginning a New Game +. Make any changes desired to skill point allocation and/or skills loadout and save the game to use for the New Game +.

Remnant VI is a unique skill because it is initially supposed to be locked until the mission Peebee: Secret Project has taken place. However, it is possible to have the skill be available from the start of the game during a New Game +. There are four different cases for this skill and the saved game from the prior character affects if it will be available immediately.

The remnant decryption puzzles that award free skill points for successful completion in the vaults reset and these points can be acquired again.

The Skill Respec Station on the Tempest resets back to the default starting price of 20 credits during a New Game +.

The Special Delivery Cache terminal on the desk in the Pathfinder's Quarters on the Tempest will reset and all of the items will be awarded again.

Activating the terminal awards items in an automatic process and so it is possible to violate the inventory item limit by having a greater number of items than normally possible. However, until the item count is at or below the normal limit, any regular inventory-based actions that rely on the item limit will not be possible.

During a New Game +, all four statistics menus are reset back to zero or the default state.

All currently acquired strike teams remain after a New Game + as these are tied to the game account and not a specific Ryder. However, until the mission First Strike is completed, and access to the strike team console is available, it is not possible to interact with the strike teams.

The Load Save screen from the previously active Ryder will be shown. All characters with save files in the BioWare/Mass Effect Andromeda/Save folder will be shown, including Ryders created as New Game +. However, it should be noted that only save files created after the completion of Meridian: The Way Home (main story line) will be available for New Game +.

Navigate left or right to choose a character. If a character has not completed the main story line, there will be no saves available to use for New Game +.

Choose a file to load. The game will initialize and the Character Customization screen will be loaded. A character will flash on the screen briefly, then the Pathfinder from the loaded game will appear. All previous customization choices will be in place (or default if they were not changed): appearance of all three Ryders (Alec/Sara/Scott), training, Shepard's gender, and name.

From this point, the character creation process is the same as when starting a regular new game.

If the player has an account on the Mass Effect Archives, choosing "Import Character Data" will load the character set currently selected on the website. The set will not be displayed and there is no confirmation before the load.

Choose "Confirm and Start Game" to save the changes and begin the game. Select "Exit" to back out to the main menu without saving.