The Pathfinder Observer is a sniper rifle. It is available to players who purchased the Deluxe or Super Deluxe Edition. Tier V is the highest available for any Pathfinder firearm.

This semi-automatic sniper rifle feeds data directly to a Pathfinder's SAM, allowing adjustments to the weapon's balance, recoil, and heat buildup. The Observer records all scope data, even beyond the visual spectrum. It is a scientific tool as much as a deadly weapon. 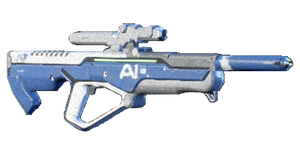 The following augmentations cannot be applied to the Pathfinder Observer during development:

It is advised not to apply the Electrical Conduits augmentation to the Pathfinder Observer due to an automatic firing problem. (See here for details.)

As the Pathfinder Observer is already a semi-automatic weapon by default, do not apply the Single Fire System augmentation to this weapon during development. This only wastes an augmentation slot.

Despite being classified as Rare, the Pathfinder Observer only has 2 augmentation slots.

During a New Game +, the Special Delivery Cache terminal resets and another copy of this weapon at Tier I is awarded. This weapon will not be level-dependent.

There is no multiplayer version of this weapon.