The Heleus Cluster is home to one hundred sixty-eight planets in thirty-eight star systems. Surveying and classification of Heleus is an ongoing process. While some planets have official names, others are still known by their initial survey data: "H" (for "Heleus Object") followed by a catalogue number.

Planets are worlds that are a rich source of minerals, XP, and Research Data, worth exploring even beyond the completion of Dr. Leynomi Aridana's celestial model. The Tempest is able to scan planets for these unique and valuable rewards. For a complete list of scanning rewards, see Tempest Scanning Rewards.

The Tempest can land on seven worlds, as well as the Nexus space station and, eventually, Port Meridian on the Meridian seed world. Of those seven worlds, five worlds contribute directly to the viability of the Andromeda Initiative. Only four will support Initiative outposts, once the minimum viability threshold and certain requirements have been reached. 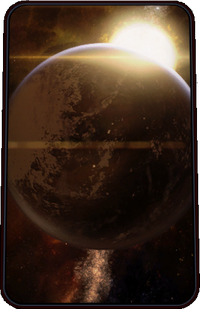 Golden worlds are planets in Andromeda's Heleus cluster that are either the strongest possible candidates for settlement, or whose resources could bolster the Initiative's chances at long-term survival. Based on survey data and long-term projections, some are believed to be garden worlds capable of supporting life; others are mineral "treasure troves" that could supply fledgling colonies with vital resources.

These worlds were designated Habitats 1-7. While not generally used in planetary surveying, the term "golden worlds" was coined by the Andromeda Initiative's marketing team and has stuck ever since.

The Initiative's early settlement strategy revolves around these golden worlds. The arks cannot sustain a population in stasis indefinitely, and the Nexus requires vast quantities of refined ore, helium-3, water ice, and element zero. On-the-ground Pathfinder surveys are essential to confirming quickly that the golden words are suitable for outposts. 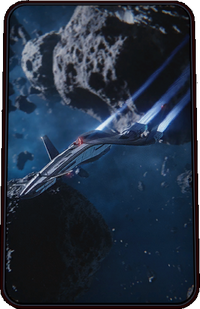 Charting the Andromeda Galaxy for habitable planets presents a unique challenge. Observation is limited by light, and given Andromeda's distance, any observations from the Milky Way are 2.5 million years out of date—enough time for a planet to have altered irrevocably.

Initial attempts to identify settlement sites were made by obtaining asari astronomical surveys and running them through predictive models. But Jien Garson was unwilling to risk thousands of colonists without solid information.

Eventually, the Initiative obtained promising data from quarian explorers who claimed to have found a geth array on the fringes of the Perseus Veil. This array was supposedly built from three mass relays, using sensors in the combined relay corridor as a form of FTL "telescope," to observe dark space beyond the galactic rim. Why the geth expended so much effort to study dark space is not known.

Amongst these observations were near-contemporary surveys of Andromeda. When our predictive models confirmed them within an acceptable margin, the Initiative was able to begin identifying "golden worlds."

The number of planets scanned can be tracked on the Accomplishments tab in the statistics menu.

The following achievements and trophies can be earned which are related to Planets: