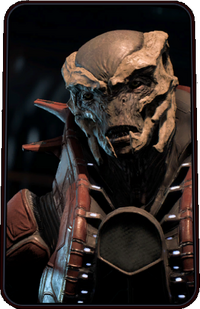 Second-in-command to the Archon, the Primus is reportedly trusted with leading many of the kett's most dangerous factions. APEX teams have sighted her as a hands-on leader at key kett positions, and orders from her are treated as coming from the Archon himself. Her main area of responsibility appears to be managing the kett conquest of Heleus via exaltation.

In as much as we can determine with scant details on kett culture, the Primus is believed to be extremely orthodox. Intercepted and translated reports show her ordering punishments for kett who deviate from social norms and traditions. She has also repeatedly expressed concern over the need to break off military exercises or recon missions to investigate Remnant technology, suggesting this is not a normal element of kett expansion.

Evidence now proves that the Primus and the Archon are at odds. Investigations show that the Primus disapproves of the Archon's single-minded interest in Remnant technology, believing it to be a distraction from the kett's attempts to conquer Heleus. She has repeatedly attempted to correct this focus on the Remnant with little success, and appears to have no recourse left other than to replace the Archon.

With the Archon dead, the Primus is now de facto leader of the kett forces in the Heleus Cluster. Freed from the "distraction" of investigating and defending Remnant structures, we can expect the kett to remain a clear and present danger under her leadership.