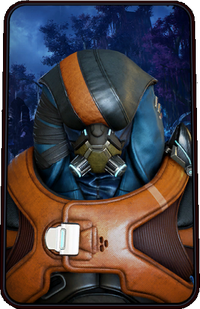 The Roekaar are a group of angara that are against all alien races. They were founded and are led by Akksul.

Jaal describes the Roekaar as "dangerous cousins." Ruthless and single-minded, the Roekaar's propaganda describes their intent to drive all alien invaders, both Milky Way and kett, out of the Heleus Cluster.

The Roekaar were founded by Akksul, a charismatic angara who once studied with the Moshae. Jaal explains that Akksul was captured by the kett and held in a forced-labor camp for over a standard year while the Resistance could not risk a rescue. Though he survived, Akksul was embittered against the Resistance and alien life. Upon his escape, he recruited young angara and disaffected Resistance members into an independent force named after fearsome soldiers from angaran mythology: the Roekaar.

The arrival of the Nexus—portrayed as further invaders by Akksul—provoked the Roekaar past breaking point. They are now engaged in full-fledged guerilla operations against all non-angaran inhabitants of the cluster. The Angaran Resistance officially disavows the Roekaar, but family and political interconnections complicate any organized opposition to them.

Though Roekaar enemies will attack Ryder outside of missions, killing them doesn't necessarily earn XP.