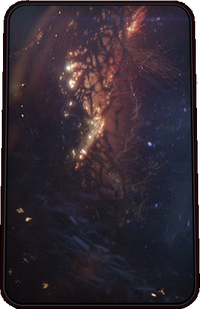 The Scourge is the colloquial term for a huge and extremely dangerous interstellar phenomenon sighted across much of the Heleus cluster. It appears to be a cloud spreading in "tendrils" that affect planets and surrounding space, destroying starships that attempt to pass through or near it.

Observations and data from the Nexus now show the Scourge's "tendrils" are composed of radioactive, element zero-rich dust and debris. Within these tendrils, thousands of microscopic and unstable warps in space-time are constantly erupting.

These unpredictable distortions build up a charge in the eezo, causing uncontrolled mass effects that alter gravity and can rip a starship apart without warning. The Scourge's presence also affects nearby planets, raining down radioactive fallout and debris, or even altering the orbit of worlds that pass through or near it.

The Scourge is aggressively drawn to Remnant structures on planets, though the cause of the attraction is not yet fully understood. This manifests as further "tendrils" of dust and radioactive particulates that cling to the surface of Remnant technology and interfere with its operations. Either this matter was left behind after the planet in question passed through the Scourge itself, or even distant interactions with Remnant technology can cause the Scourge to coalesce spontaneously. In either case, even this minor manifestation of the Scourge demands additional caution when approaching Remnant sites.

No long-range data showed any sign of the Scourge before departure to the Heleus Cluster. Nexus scientists suggest it must have appeared in the intervening centuries while the arks traveled to Andromeda.

We now know the Scourge is the fallout of a weapon detonated at Khi Tasira. Doctor Aridana believes the weapon caused an instantaneous cluster-wide warping of space-time, briefly connecting multiple points in the Heleus Cluster at once.

Her models suggest the warp effect annihilated multiple planets, forming the debris in the Scourge's tendrils, while the resulting radiation converted much of that debris to element zero. As we have seen, the space-time warping effect continues on a micro scale within the Scourge to this day.

The following portions of the codex entry appear early in the game but are replaced during gameplay as more information is gained on the Scourge:

Early study of the Scourge has been difficult, and it does not match any previously known stellar body, leading to many wild theories about its nature. Given the problems in observation and the Scourge's unaccounted effects on gravity, some have even suggested it is a dark energy phenomenon in the literal sense, meaning a form of energy that has no electromagnetic interaction and thus cannot be detected (hence "dark"), yet has strong negative pressure, causing expansive effects on a cosmic scale. Though the Scourge's characteristics don't match our current understanding of dark energy, these theories persist while further observations are taken.

One of the Scourge's more interesting characteristics is that it appears artificial. Its origin point is yet to be determined, but the pattern of the "tendrils" and the composition of the cloud could not have been caused by any celestial event known to astrophysics. Investigations are ongoing, though slowed by the deadly conditions created by the Scourge.

It should also be noted that it is attracted to Remnant technology and is most seen near Remnant ruins.

The scourge damages life support through electric shock. Scourge tendrils tend to be very sporadic for electrical damage. Most don't harm Ryder at all but those that do hit hard with a Hazard Level 4

ELECTRICAL DISCHARGE. Occasionally, a Hazard Level 3 will be encountered but this is more of an anomaly than anything else.

When The Journey to Meridian is acquired, the

symbol will get locked to the Codex at the top of the screen and to the Scourge codex entry. There is no way to remove this icon. Once this happens, you will have to open the Codex screen and check to see if any of the categories are showing a new codex entry has been added.