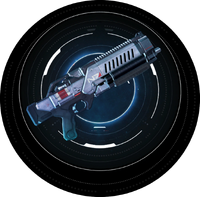 Shotguns are a close range weapon. They are a great choice for large targets, grouping, or for extra kick. They hit hard with a wide shot pattern.

The following table lists the Tier I stats of each shotgun for ease of comparison. Augmentation slots appear at Tier II.

The following table lists the multiplayer Tier I stats of each shotgun for ease of comparison.

Despite being classified as Rare, the singleplayer Pathfinder Deep Impact only has 2 augmentation slots.

There is a chance that a shotgun purchased, crafted, found, or recovered by a Strike team Item Loot Box will drop a random augmentation on deconstruction. (See Augmentation Drops for odds of recovery). Researchable augmentations not already known will not be recovered. This drop will not be shown on the deconstruct screen and you will have to compare your inventory before/after to determine if an augmentation was dropped.

The number of shotgun kills can be tracked on the Accomplishments tab in the statistics menu.

2 The M-23 Katana S and Shorty are multiplayer only weapons and can't be crafted.

3 The rarity for the N7 Piranha is a Rare blueprint but changes to Ultra Rare in singleplayer Inventory and multiplayer.

4 The rarity for the Scattershot is an Ultra Rare blueprint but changes to Rare in singleplayer Inventory and multiplayer.