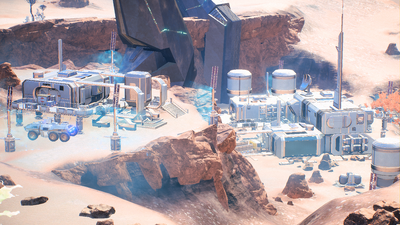 Site 2: Resilience is one of the areas on Eos.

Site 2: Resilience is the second of two failed attempts by the Andromeda Initiative to colonize Eos, the first being Site 1: Promise. Like its predecessor, Resilience was chosen for its proximity to a water source, though the water proved impossible to decontaminate by normal means. Between Eos's many environmental hazards, and an ambush by the Kett, Resilience was abandoned by the Initiative, ending its colonization efforts on Eos prior to Ryder's arrival.

Unlike Site 1: Promise, Resilience is split into two parts: a very small compound on the northern cliffs of the site, and the main area of the outpost bordering the lake to the south. The two areas are separated by Level 1 Radiation Hazard. The northern compound contains two modified exploration vehicles and a sealed building, while the main area hosts a large headquarters, a small shed, and a landing pad hanging just over the lake. Attempting to enter the lake will result in Ryder being teleported back to land.

The following missions take place or are acquired at Site 2: Resilience:

Because Site 2 is fairly spread out with a number a buildings, finding all of the items can take a bit of patience.

For a complete list of items with pictures and scan data, see Site 2: Resilience Research Data.