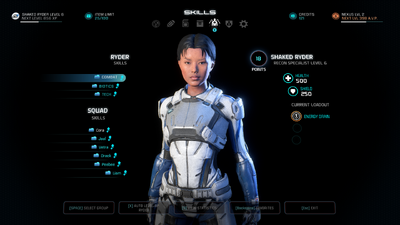 Skills, also known as powers, are character abilities. There are no restrictions on what skills a player can choose. Enemies have specific strengths and weaknesses and the strategic use of different skills will determine the tactical advantage against opponents.

Skill types break down into three main color coded categories: Combat (Red), Biotics (Violet), and Tech (Orange). Each category type has its own set of active (

) skills. Each is designed to facilitate a certain style of play.

Each skill has a skill tree that can be unlocked using skill points, allowing the skill to become more effective.

Skill points are awarded in different amounts based upon Ryder's current level.

Squadmate skill sets are fixed, character-specific, and consist of 3 active and 2 passive skills using a mix of the standard 36 skills available from singleplayer gameplay as well as a few skills shared with multiplayer gameplay. (See: Multiplayer Skills)

Skill points can be reset at any time at the Re-Spec Station in the Med Bay on the Tempest.

The first reset costs 20 credits and the price increases for each subsequent use.

Resetting skill points also resets all profiles except the corresponding profile chosen during Character customization, which returns to Rank 1. Further ranks and all of the other previously attained profiles will need to be unlocked again by spending skill points.

when used. Replenish power cells at a supply cache.

Squadmates skills do not use power cells but instead are replaced with recharge times.

The following skills in singleplayer mode use, can be upgraded to use, or modify the use of power cells:

The following boosters increase the amount of power cells available:

The following equipment increase the amount of power cells available:

The following skills in multiplayer mode use, can be upgraded to use, or modify the use of power cells:

The Statistics menu can be accessed from the Skills menu. Four types of detailed statistics can be viewed: General, Nomad, Narrative, and Accomplishments.

During a New Game +, all statistics are reset back to zero or the default state.