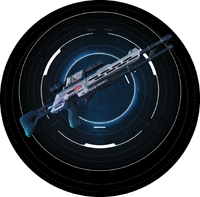 Sniper rifles are a long range weapon that allows players to hang back and pick off enemies one-by-one. They are heavy hitters, high-powered and accurate.

The following table lists the Tier I stats of each sniper rifle for ease of comparison. Augmentation slots appear at Tier II.

The following table lists the multiplayer Tier I stats of each sniper rifle for ease of comparison.

Despite being classified as Rare, the singleplayer Pathfinder Observer only has 2 augmentation slots.

There is a chance that a sniper rifle purchased, crafted, found, or recovered by a Strike team Item Loot Box will drop a random augmentation on deconstruction. (See Augmentation Drops for odds of recovery). Researchable augmentations not already known will not be recovered. This drop will not be shown on the deconstruct screen and you will have to compare your inventory before/after to determine if an augmentation was dropped.

The number of sniper rifle kills can be tracked on the Accomplishments tab in the statistics menu.

1 The Remnant weapons (Shadow and Inferno) do not require reloading; the real firing limitation comes from overheating.

2 The Kishock Harpoon Gun and Viper S are multiplayer only weapons and can't be crafted.

3 Despite what the description says, the Isharay and Widow are not single-shot weapons but semi-automatic. Using skills to increase clip size, it is possible to get more than one shot per thermal clip.