Tempest is the Pathfinder's starship. It is the fastest ship in its class and is capable of doing 13 light-years per day. The ship has no heavy armor or main gun, so it relies on stealth.

The following missions take place or are acquired on the Tempest:

In addition to the Crew Info Board in the Crew Quarters area, there are two email terminals, one on the Bridge, the other in the Pathfinder's Quarters. 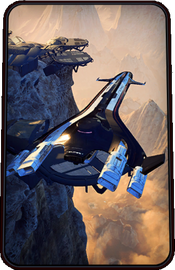 The Tempest is a survey ship designed for long-range, long-term exploration under a Pathfinder's command. Its light weight and efficient design allow it to operate with a small crew and minimal resources.

Built by the Andromeda Initiative, the Tempest makes use of several once-proprietary technologies, including an IES stealth system original developed by the Systems Alliance. Many of these systems were permitted on the condition that the Tempest only operate in the Andromeda Galaxy.

The Tempest's engine is a variation on the arks' ODSY drives that allow long-term operation, capturing a percentage of the static buildup in capacitors. The recycled electrical charge powers several of the Tempest's onboard systems.

As a Pathfinder vessel, the Tempest has research and development facilities, laboratories, and a well-appointed meeting space to accommodate dignitaries, anticipating any potential first contact scenarios. 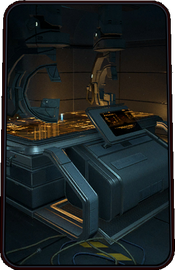 The Tempest required a number of experimental technologies to accommodate the unique requirements of a Pathfinder team. Its planetary surface imaging, for example, uses photosensitive and radar/lidar-emitting microsatellites that coordinate with the Tempest's router back to SAM Node. I then conduct simulated scientific and probability studies on the data before presenting the Pathfinder with a summarized analysis, typically in 0.5 seconds.

The Tempest's computer network presented interesting challenges. As most Milky Way computer systems have anti-AI safeguards built in, the Tempest's network had to be designed from scratch to accommodate my interaction with the ship's systems. Firmware bridges, inspired by studies into geth networking technology, allow me to temporarily interact with and augment sensors, communications, and the ship's navigation array.

Given the desire to reduce mass without sacrificing safety, the electrical charge from the Tempest's capacitors is used to keep the ship stable, via prototype piezoelectric vibration reduction (PVR) technology. When the ship's superstructure is bent by vibrations—such as during atmospheric re-entry or complex flight maneuvers—piezoelectric elements receive an electrical charge that bends bulkheads in the opposing direction, reducing vibrations and smoothing the ship's flight path. 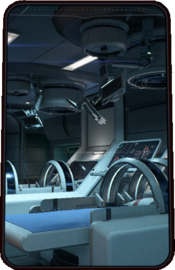 The Tempest is equipped for long-range survey and scientific studies, which are carried out at the ship's two main labs.

The bio lab is equipped to hydroponically grow both Milky Way and Andromeda plant life, for research or consumption. The plants also clean the ship's air and generate a modest amount of oxygen. Sealed observation chambers are set up to study small fauna, sequence genetic material, or simulate bacterial growth in carefully controlled conditions. All biomatter entering or leaving the lab is subjected to additional quarantine measures.

The tech lab is used for engineering and technical studies, spectral analysis using laser apparatus, and for analyzing the capabilities of discovered technology. New minerals or metals can be subjected to additional resistance testing before being used in the Tempest's Research Center. Because of the potential volatility of new materials, the tech lab is equipped with heavy shielding and can be sealed off in an emergency. 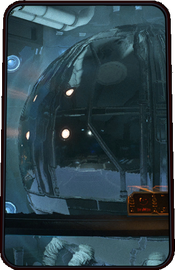 Standard ship drive cores build up static electricity, and require periodic discharge on a planet or at specialized facilities to prevent static from building to dangerous levels. With few such suitable discharge points in dark space, the ODSY drive core was developed for the arks' long-haul journey to Andromeda. The Tempest's drive core is an experimental small-scale variant based upon the original design.

Cross-galaxy, the arks gathered hydrogen using an electromagnetic ramscoop, converting it into protons with an ionizing laser. Proton collision in the arks' fusion reactors provided power for their thrusters. The Tempest's thrusters run on conventional helium-3, though Initiative breakthroughs in fuel efficiency means their helium-3 requirements are drastically lowered. 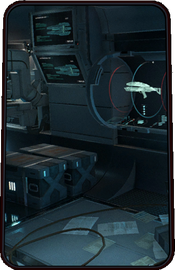 Pathfinders are often the first to encounter new potential threats or valuable technology. The Tempest is therefore equipped for sophisticated research and development in the field, to support a fast turnaround of any necessary upgrades or analysis. Its Research Center syncs with the Tech Lab systems, giving insight into the capabilities of new materials and their potential applications.

My connection to Ark Hyperion and the Nexus allows me to transfer data and latest discoveries from the scientists stationed there. Quantum computing enables multiple complex simulations to be run simultaneously, and new components or configurations can be tested virtually before they are built. 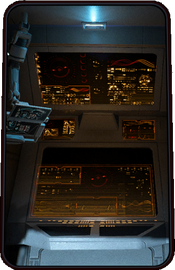 In 2183, the Systems Alliance and the Turian Hierarchy co-developed the IES (internal emission sink) stealth system for small military frigates. It's unknown how the Initiative acquired this system for its survey ships, as IES stealth technology is classified. Despite valid security certificates, no record of negotiations exists in the Nexus legal archives.

An IES stealth system is designed to capture the heat and radiation emitted by all starships in refrigerated storage sinks, effectively removing the ship from sensors. Initiative starship systems are streamlined to emit less electromagnetic and particle radiation, and to lower heat production. This reduces the amount of emissions to be stored. Additionally, breakthroughs in cryogenic research allow the storage sinks to be more effectively refrigerated, allowing longer stealth time before the sinks must be vented for safety.

The Tempest can remain stationary in stealth for several hours, or travel at FTL in "silent running" for shorter periods.

When the Tempest lands on a planet, the following map symbol

will indicate the landing zone. The Tempest can also be used as a fast travel point

Of the four outpost locations, only Ditaeon does not have a landing site for the Tempest.

The following achievements and trophies can be earned which are related to Tempest: