< User:Blazedspawn‎ | sandbox
Edit
This article is a stub. You can help Mass Effect: Andromeda Wiki by expanding it. 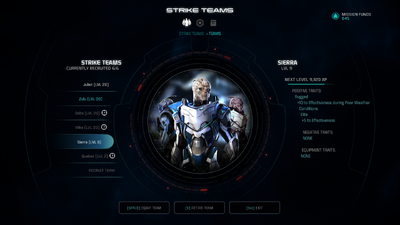 Strike Teams are elite APEX forces that can be sent on strike team missions to support the Andromeda Initiative.

Players are given one strike team by default. Five additional teams can be recruited from the Strike team console using Mission Funds, for a total of six teams.

There are two types of strike team missions:

There are four levels of difficulty, indicated by a color coded icon:

APEX missions are indicated by an APEX icon

in the center of a mission icon (

level missions do not show an APEX icon. These matches can only be played from the Custom Match menu in multiplayer. They do not appear on the Strike Team Console.

Automated strike teams can be assigned in the multiplayer menu, at the Strike Team Console on the Tempest or in the Militia Office on the Nexus, or through the APEX HQ app.

Multiplayer missions can be accessed from singleplayer through Jump to Multiplayer on the Game menu or by selecting Multiplayer from the game's start menu.

The time required for completion of a strike team mission using an automated strike team can vary for a particular mission and is given at time of assignment. For a given difficulty, APEX missions tend to run longer than standard missions.

For a detailed breakdown of the mechanics of the Strike Team Console, see Strike team console.

Loot boxes are awarded as Bronze

based upon mission difficulty. Research loot boxes are always Bronze, no matter the difficulty.

In addition to difficulty and type, all strike team missions have three variable traits. One enemy and two other mission traits are assigned randomly at posting. The non-enemy traits only affect the automated strike teams.

APEX missions will have an additional parameter known as a Modifier. These modifiers may or may not increase the rewards for completing the mission in multiplayer gameplay. Modifiers do not affect the automated strike teams, but may be viewed from the Strike Team Console on the Details screen.

There are 3 possible enemy types: Kett, Outlaw, Remnant. The type of enemy is not fixed; Acquire Enemy Research may be assigned with Outlaw in one instance and with Remnant in another.

Each mission has three traits assigned, including the enemy. Mission traits can vary and are given at time of assignment.

Strike team traits can increase or decrease a team's odds of success. There are two types of team trait: mission-specific and general.

Each team starts with a single positive trait. Additional traits are acquired as the team completes missions and levels up.

Positive traits always improve the odds. Negative traits cannot reduce the odds below the odds for a Level 1 team.

Mission-specific traits have no effect on Gold missions until the team reaches Level 3.

General traits have no effect on Gold missions until the team reaches Level 4.

There are two types of equipment, general and mission-specific. A team can only use one piece of equipment at a time; new equipment replaces the old.

The general equipment Adrenaline Shots and Crate of Specialized Ammo give less than one level of benefit. There is no significant difference in the odds of success on Bronze missions at any level.

As with General equipment, there is no significant difference in the odds of success on Bronze missions at any level.

The base odds of a team successfully completing a mission depend on the team's level, as shown in the tables below.

Strike teams earn XP for every mission, regardless of outcome. The following table shows the XP required to move from one level to the next and the cumulative total for each level.

Since the player has no control over which traits a team acquires, developing an effective team roster is all about equipment. A full roster has six teams, but there are only five types of specialized equipment. Having five teams of specialists and one general-purpose team will maximize the number of successful missions without spending mission funds to switch gear.

The following achievements and trophies can be earned related to strike teams: