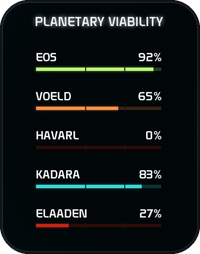 on a potential colony world, the viability rating of the planet will increase. AVP can be earned by scouting planets, making allies, defeating threats, repairing damaged environments, and other actions that make Heleus a better home.

The graphical display of planetary viability has some additional features and information that isn't explained.

There is a color coding system that applies to each viability bar.

There are two vertical dark lines on each viability bar that correspond with 40% and 70% viability.

Certain cryo pods can only be unlocked if the player earns sufficient viability on a specific world.

Players must earn at least 40% viability on a planet before an outpost can be established. On those planets, outposts grant a massive AVP reward and a new hub with its own missions to pursue. In addition to reaching 40% viability, there may be other specific actions needed on certain worlds to support an outpost. If so, these actions can be found in the Journal under "Heleus Assignments" for that planet.

If planetary viability is raised to 100% for all five planets and the mission Epilogue: Home and Away has been completed, a special Priority Ops mission The World is Waiting will be unlocked.

Once the mission AVP Cryo Deployment Perks has been completed, planetary viability can be checked from the Main Menu:

It can also be checked through the planetary holo in the Pathfinder's Quarters or in Pathfinder HQ.

A small amount of Viability is available for free using the Tempest to scan anomalies. For a complete list of anomalies that give rewards, see Tempest Scanning Rewards.

The following achievements and trophies can be earned related to viability: