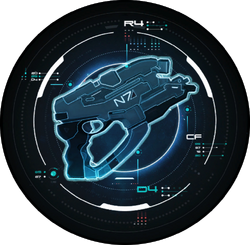 Weapons are equippable items. There are no class restrictions on weapons.

Blueprints for researched and Andromeda Initiative-issued weapons are unlocked at specific levels. Found and purchased weapons level up on the same schedule as AI-issued blueprints. Once a new tier is unlocked, prior tiers will not be found or available for purchase during gameplay.

There are four categories of firearms and one category for hand-to-hand combat weapons:

Each firearm that can fire a projectile or beam has a mode of firing. The following modes are found during gameplay:

Some weapons have different effects and/or firing modes if charged before firing. Refer to each weapon page for specific details on any special modes of firing.

Firearms have two general types of ammunition available for the weapon to function - single-use thermal clips and infinite heat sinks.

Weapons fall into three technology types based on where their supporting tech comes from.

Weapons fall into one of four categories: common, uncommon, rare, or ultra rare. Each weapon rarity icon corresponds to a color coding. As rarity increases, the value of the weapon increases as well.

Weapons that are crafted use the same light blue colored icon, no matter the rarity.

Weapons can be purchased from the following merchants:

Weapons can only be changed at a Loadout station or using the Item Pickup menu.

Displayed melee weapon stats do not change even when directly modifying the melee weapons, melee damage, and/or melee function.

The singleplayer stats shown on the weapons pages are baseline: Initiative I armor, no skill points assigned, no profile active.

Squadmate weapons are fixed and can't be changed or upgraded.

There is a chance that a weapon purchased, crafted, found, or recovered by a Strike team Item Loot Box will drop a random augmentation on deconstruction. (See Augmentation Drops for odds of recovery). Researchable augmentations not already known will not be recovered. This drop will not be shown on the deconstruct screen and you will have to compare your inventory before/after to determine if an augmentation was dropped.

The following achievements and trophies can be earned related to Weapons:

Weapons are the focus of the following challenges: